Over the last century the burning of fossil fuels like coal and oil has increased the concentration of atmospheric CO2. This happens because the coal or oil burning process combines carbon (C) with oxygen (O2) in the air to make CO2.

The clearing of land for agriculture, industry, and other human activities has also increased the concentrations of other greenhouse gases like methane (CH4), and further increased (CO2).

The extra heat from the greenhouse enhancement drives climate change by modifying weather patterns that, in turn, have an impact on the ecosystems. GHGs are transported in the atmosphere with the winds: they can travel even thousands of kilometres. The additional greenhouse gases are contributing to global warming.

Climate that is changing has different local impacts around the world regardless of the origin of GHGs. GHGs remain in the atmosphere for different amounts of time and some of them are more effective than others at warming the atmosphere.

One of the ways to compare the different GHGs and their input to global warming is by the so-called Global Warming potential (GWP). This is the warming potential of a GHG compared to carbon dioxide (CO2) over a defined time period, for example 100 years. Each greenhouse gas has a different value of GWP depending on its atmospheric lifetime and the absorption characteristics of electromagnetic radiation.

The industrial slowdown due to the COVID-19 pandemic has not curbed record levels of anthropogenic greenhouse gases according to the World Meteorological Organization (WMO).

The lockdown has cut emissions of many pollutants and greenhouse gases such as carbon dioxide. However, any impact on CO2 concentrations – the result of cumulative past and current emissions – is in fact no bigger than the normal year to year fluctuations in the carbon cycle and the high natural variability in carbon sinks like vegetation.[1] Carbon dioxide levels continue at record levels, despite COVID-19 lockdown.

The Global Carbon Project estimates that during the most intense period of the shutdown, daily CO2 emissions may have been reduced by up to 17% globally due to the confinement of the population. As the duration and severity of confinement measures remain unclear, the prediction of the total annual emission reduction over 2020 is very uncertain.

The consequences of changing the natural atmospheric greenhouse includes: 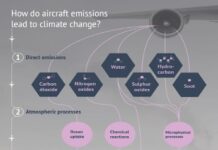 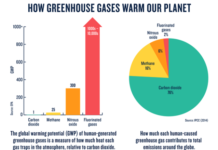